Several months ago, I had one of those once-in-a-lifetime experiences.  During a nasty storm, I watched as a (thankfully small) tornado spawned in the cul-de-sac just outside of my house.  I was also extremely lucky; while several roofs and cars in the neighborhood were crushed by falling trees, the only damage to my house was a single piece of fascia flashing that was bent and ripped off the house. 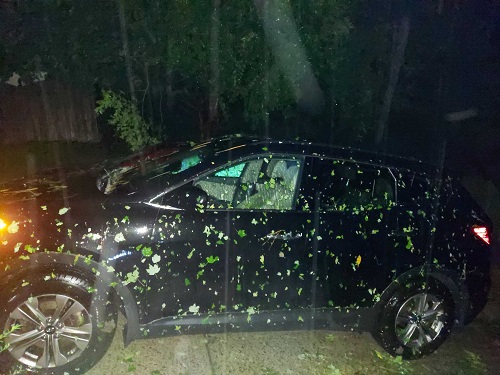 My wife’s vehicle in the driveway right after the tornado passed.

Then, something even more unusual happened – I couldn’t get anyone to fix it.  I called roofers, siding contractors and even handymen.  Nobody would call me back – it was too small of a job for contractors, and too high up in the air for a handyman.

I must have called a half dozen companies in the weeks before I saw three roofers on a house two doors down from mine.  Their company truck was parked out front and had a phone number on the side, so after a few minutes of thinking about it, I called, and a guy picked up the phone and asked me how he could help.  It only took me about 30 seconds to notice that the person on the phone with me was standing right there in the neighbor’s lawn.

We got off the phone and both took a 15 second walk to my house. After looking at my bare fascia, he said he had flashing in his garage that would work perfectly, and he’d do it for $100.

After all the time I had wasted on trying to get this fixed, I would have happily paid twice that – maybe more. I just wanted to know when he could do it.  He said he was returning to work on the neighbor’s roof the next day and could take care of it then. And he did – by the time I had dropped my kid off at school the next morning, it was already fixed.

But, it gets better.

I paid him $150, and offered $50 more if he could quickly look at my roof and confirm there was no damage from the tornado (thankfully, there wasn’t).  I was thrilled with this arrangement, but he must not have felt right about taking the extra money.  While he was examining my roof for damage, he also cleaned out my gutters – another task I had planned to deal with later in the week.

When It’s Easy to Be a Hero, Be a Hero

From my perspective, this guy is a hero.  He took care of three problems for me in one visit, and did each of them more cheaply than I would have paid for anyone else to do them.  From his perspective, he made $200 for an hour of work and $25 of materials, with no travel time at all.  It’s hard to keep a business afloat with $200 jobs, but if they come along that easily, why not take them?

Here’s the most important part.  This business owner knew that he wasn’t just doing a job.  He was marketing his business, too. That’s why he left me his card after he was done, and asked me to call when I need a new roof.

I put his number in my cell phone.  Guess who I’m calling when I need a roof in a few years? Here’s a hint – it’s not any of the roofers that didn’t even bother to price my small job.

Building a Reputation the Easy Way

This story offers several examples of how to think like a growth-focused small business owner.

This contractor was on a job and could have easily screened my call. But he took my call instead and stayed focused on my problem during the conversation.

It would have been easy to tell me his calendar was full and offer to come back at a later time. But when I asked for help, he saw the request as an opportunity and not a complication.

And most importantly, he knew I was frustrated with a problem he could fix quickly and easily.  So he took the time to fix it. That’s how companies earn five-star reviews.  That’s how word-of-mouth marketing spreads.  That’s how small businesses turn into bigger businesses.

So if you’re painting someone’s house and see a vehicle slowing down and taking an extra look at your truck (or the work you’re doing), take the time to introduce yourself.  Ask if they need help.  And if they do need a small job done a few doors down, give them the no-travel rate and knock it out quickly.  Be a hero.

And then leave your card behind for when they – or their friends or family – need a real paint job.

To learn how ProPainter Websites can help your painting contracting business gain new customers, call us at 919-424-6121 or email us at Team_PPW@ProPainterWebsites.com.